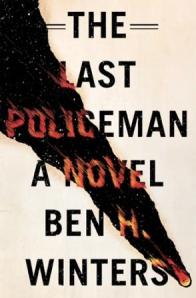 Now here’s an intriguing twist in the detective genre! The Last Policeman is Detective Hank Palace, and he’s investigating the suicide of an insurance salesman, which he is convinced is really a murder. But it’s difficult to get anyone to care about his case, as an asteroid is hurtling towards Earth, and there are only six months left for the human race…

This is an unusual novel which in many ways is a straightforward detective story – a dedicated cop, beset by family troubles, surrounded by incompetence, following a case mired in conspiracy and replete with red herrings. But set that in a pre-apocalyptic scenario and it starts to question human nature way beyond the norm – not just “why do people act in such a way?” but also “how would you react to imminent, inescapable doom?”. And characters’ complex reactions to the asteroid are integral to the development of the investigation and the big reveal. Just how would you react – would you go into denial, stay at your post, get high on drink or drugs, join a cult offering salvation? The concept neatly messes with characters’ motivation so you as the reader can take nothing for granted. The rules have subtly, inevitably changed.

I really liked Hank’s character – his single-minded determination to do the right thing, his compassion, his dry perspective. I really, really wanted the resolution to the murder mystery to save the world, but that would be too simple, and as there are two more forthcoming novels about Hank Palace, I fear that he will be staying at his post until the inevitable end of days… The Last Policeman is a very good genre-bending read and I’ll certainly be following gumshoe Hank’s fortunes in the sequels. As for what I’d do if there was six months left – well that would be telling!

Copy provided by the publisher for review